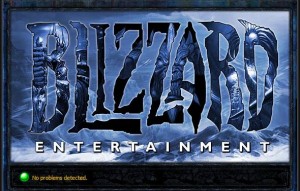 That would be ME! I just got an e-mail from Blizzard that I’ve been selected to beta test, FINALLY! It says I’ll see the client available for download within 24 hours. I can’t wait! I was so stinking jealous every expansion as I watched others get to play the beta while I could only read about it.

That’s all I’ve got for now. Looks like you’ll be getting updates more often now.

I don’t get to play as much as I used to, but I sure am having fun playing my level 46 gnome mage, Blastr when I get a chance. He’s full frost and is gear pretty much sucks because I’m spending all of my extra money on enchanting and tailoring (I’ve got that rout with Deadr before and made a killing in the auction house).

I’m on vacation this week and decided to post to all of my various sites that I maintain/publish rather than play WoW, so I’ll be back playing a couple of hours per week next week. I want to get him to 80 more than I do getting Gitr to 80, because who really wants to level a warrior 70-80? I’ve already got Protectr (pally) and Grimr (hunter) waiting at 80 for the expansion.

I’ve been spending all of my time on WoW playing Grimr, my original toon who was stuck at 35 forever and a day after I started the world-famous Gitr and began my alt-aholic spin into burnout. He got Cold Weather Flying before hitting the Sholazar Basin and has been flying (literally) through quests.

He’s making his way through the Basin in rapid-fire mode using Kopp’s Alliance Guide and has a beautiful stealthing cat from Zul’Drak by his side. It’s time to buy a new stable and get a Rok from the northern area of Sholazar Basin and also add Pitch to his stables. That should about do it until Blackmaw at level 79.

Too bad you can’t tame and hold onto everything.

We dropped 1200g on a whim upon dinging 78 to buy the complete set (minus an unavailable helm) of Swiftarrow Battlegear. It did some mad-crazy stat improvements and should hold me until 80 when we start doing heroics and dailies.

Late last night, I cracked up as I found “the hatch” in Sholazar Basin in reference to the TV show “Lost,” complete with the numbers. I have to hand it to the designers for creativity. 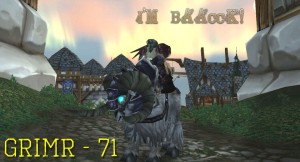 Hey, gang! I know I’ve been out of commission for quite a while now, but I sort of had to grab life by the horns after starting my business and decide whether it was better to play after my wife went to bed or try to continue building the business/making money. Keeping our heads above water won, and taking 17 hours at the University of South Florida took up the rest of my time.

But…. it’s Christmas break for 5 weeks!!

I’ve been playing Grimr this week and he hit 71 just a few minutes ago. I really can’t wait to see what kind of damage he will do as a newly-minted level 80 toon if I can pound out 80 hours of playing by January 5th. I’m using Kopp’s guide because I don’t want to waste any time since my time is so precious nowadays and I’ve already done the 70-80 journey with Protectr to see the Alliance path. I’m just ready to get Grimr up there and see if I have the patience to get Gitr up there with the lousy leveling that is the life of a warrior who can’t heal and is buddy-less.

I’m taking a hiatus to finish college (2 full-time semesters to go) but keep seeing news about the upcoming patch that makes me want to return to hoard gold for the next expansion. I’m not sure how well my Alliance toons can hoard, not being Horde, but I do have one epic flying mount. 🙂

I’m certainly looking forward to the revamped original zones and some of the class changes have me pretty interested in getting a 30-day game card just for kicks. I’d just better not do it anywhere near finals.