I had made it my goal recently to get a kitty mount from the Night Elves, though as I found out that’s not an easy task.

If you want to become exalted with the Night Elves and get your own kitty mount it is going to take a lot of time and sometimes a lot of gold.

There are four repeatable quests to gain reputation with Darnassus.

All of those will take considerable time and effort to gain the necessary reputation to become exalted, and reputation gains will vary depending on race, current reputation, and level.

So I recommend that you do what I did.  I did this with a level 64 Human Warlock and still received full reputation gains. 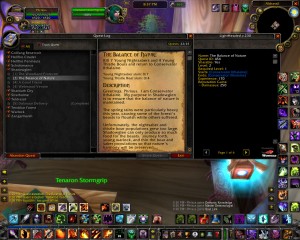 What you do is go to the Starting area for the Night Elves, Shadowglen, and do all the quests like you were a level one toon.

The quest givers won’t show up on your map, but just talk to the Night Elves around there and in all the low level areas if you are not familiar with that area. So basically just follow the path of progression the game gives you and you will gain a tremendous amount of rep.  You will still need to do the repeatable quests, but it won’t seem as daunting as before.

Follow my advice and in no time you will have your very own kitty mount. 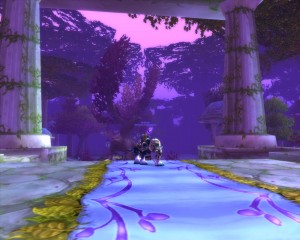