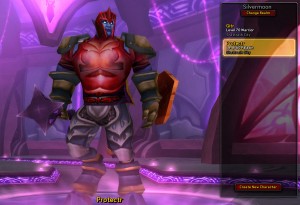 I never thought I’d have more than two toons at 60 when I finally got Gitr into Molton Core. I thought that would be too much work, but it really hasn’t been. Protectr, now a Holy paladin, became my 4th class to reach level 60 last night. Gitr is currently a 70 Fury/Arms warrior, Huntr is a 64 Beastmaster hunter, and Deadr is sitting right on the verge of 68 and is still happy being a Shadow priest.

What has been interesting with regard to Protectr is that I went directly from abandoning Paladr (level 50 Belf protection pally) on Velen to starting a new protection pally on Silvermoon to complement Gitr for end-game raiding. I wanted a tank and a healer, but I wanted to do the dirty work as a paladin rather than a priest.

The moment I hit 59, I re-specced him to Holy in hopes of running around with a buddy and healing his mad dps/tanking and to try to get into an early Ramparts. Neither one really happened this week, so my progress was a bit slow, especially due to the adjustment of not being able to run through thickets of mobs and wear them down to get at what I want. I’m finding myself picking and choosing one on one fights and trying to do some burst damage, only to drink far too often.

Fill us in on what you have been doing with your alts. Anyone hit 60 or 70 recently?