Last night I recruited PhiLogical to help me blaze through some quests since I only had an hour to play. He’s got Phrixus up to level 67 now, and my being a 61 is still a bit low for Zangarmarsh, but that makes things fun.

So, after getting 30 Naga claws and turning it in, I got the quest to plant the seeds at the pump stations and the Elite quests to kill the mini-boss Naga. We rode along the South end of Umbrafen Lake and I ran through about 7 mobs and stopped right at the pump controls where there were another 7 or so Naga and slaves. 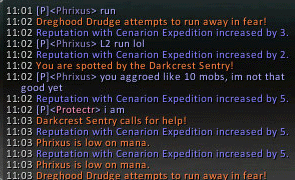 I start taking a beating and healing Phrixus’ minion, but it’s an all-out battle. The next thing I see in chat is, “run” and my heals to Phrixus came up “Out of Range.” That plea/command was followed by “L2run lol,” which is my normal joke to him for stopping to fight when we get dismounted by a daze. I keep healing myself and his minion next to me, and the mobs start dropping one by one.

Here is how to survive an all-out battle:

That is why I play a tankadin. Why do you play your class?