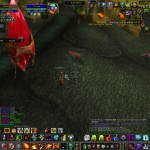 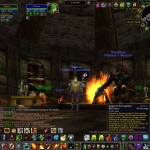 Over two years in the making, Gitr has finally hit the level cap. He was the first of my toons to hit 60, which immediately led to getting keyed for Molton Core and raiding for a few weeks before the big /gkick of frustration. One year, 2 level 60+ alts, and a level 50 alt later, it’s decision time.

Am I still an alt-aholic?

My first answer is a resounding “YES!” However, if that is the case, why have I not logged into a single alt for a single minute since Sunday? I haven’t played an alt for more than 30 minutes while waiting for Gitr’s hearth cooldown since he transferred to Silvermoon in the middle of December. One month, 10 levels, and 2 thousand gold later, I’m left with a big figgin’ “Now what?”

I want to raid, I really do. I really miss the sense of accomplishment and camaraderie of a group of seasoned veterans who actually know how to play (as opposed to sucky PuGs [keyword: PuGs] who couldn’t fight their way out of a wet paper bag). There is something to be said for banding together for a single purpose and getting phat loot along the way.

The problem with raiding is commitment.

No one can say I’m not committed to playing WoW, as I most certainly get my playing time in, much to the disregard of sleep and personal edification. What it does fall far behind is eating dinner and spending quality time with my wife and getting my school work done since college is so dang expensive. Those two priorities pretty much rule out positive commitments to raid on a specific raid night. Things happen that busy, responsible people must pay heed to rather than isolate themselves in front of the computer from 8:00-midnight on a specific night.

What does that leave me to do?

What would you do?

After 30d 18h of /played time on Gitr, he momentously hit the level cap at 1:30am EDT January 13th, 2008. It was a time of great celebration… amongst myself, as the server and guild were pretty much empty at the time. He dinged as he turned in a quest in Shadowmoon Valley. The whole thing was vid-captured, but there seems to be some problem with clipping it to the actual event. Stay tuned for the link soon.

Now, the path for getting keyed for Karazhan has begun. It looks like level 70 will be fun, since he’s already got a blue 1H mace (Apexis Crystal Mace) that does 71.7dps! Well, it cost 120g, but that was cheap for what simple blue armor sells for. That doesn’t really matter, though, because in just 2 short hours of questing away in Nagrand, I racked up 75g and didn’t turn in my last 3 quests for over 13g each. The mace is up to 334 skill level, so I’m almost hoping Gitr can find another one on the AH and dual wield them when he’s not running an instance as a tank.

You know what’s so darn cool about being 70? I don’t give a rip what level something is now. I need rep in Nagrand, so I just went out after the lowest level mobs that gave rep and drops. Such a great feeling.

It’s late, once again, so I’d better get some sleep so I can function at work and school.