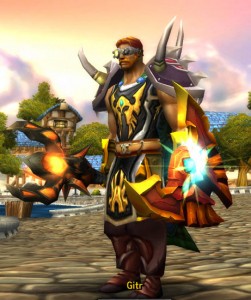 Not to start off with any spoilers, but… Kael’thas down!

We had a gimped group, but it didn’t matter. We were effectively without crowd control with 2 warriors, 2 warlocks, and a Tree of Life druid. Pulling groups came down to figuring out who to put on what mobs, what minions to use, and what order to take them down with.

All in all, it took us just over 2 hours with 4 wipes due to a learning curve pulling the groups with the Sisters or Torment.

The highlight of the night was taking down Kael’thas with his phoenix up the whole time. We couldn’t take down the egg fast enough, so we just DoT’d Kael’thas while flying around and going berserk on him for 5 seconds before he threw us up again.

After the great patch download of March 25th, 2008 that is known as Patch 2.4, Gitr immediately flew from Stormwind to the Isle of Quel’Danas, which was conveniently already a flight point. After flying right up to Ironforge, the game went to the zone/instance loading screen and I was suddenly flying over the North Sea toward and island.

The flight path takes you around the south and west side all the way up to the very northern tip where you are dropped off at the familiar (if you’ve played a Blood Elf) area around Silvermoon City. I recognized the ship as being from near the partying belfs, the area to the south look exactly like the starting zone, and the area was hopping with people. There were at least 300 toons running around the immediate area on Silvermoon realm, taking my normal 55fps down to a crawling 20fps.

The first thing I did was scream. Bloody murder! My UI was completely broken! Well, I did neglect to check the ‘load outdated addons’ from the character screen, but that’s beside the point. My WoWaceupdater refuses to work since I installed XP Service Pack 3 RC2. I know that was dangerous, but it solved my BSoD issue. I logged out to work on my research paper and slowly whittled away at downloading about 100 Ace addons.

When I logged back in later, I had most of my UI working and was able to complete 2 dailies for 9g each in about 10 minutes. As of this morning, Silvermoon is 47% done with the goal before Phase 2 opens up. I was very confused for some time until I researched what the heck was going on. I couldn’t figure out why people were killing things everywhere if there weren’t any more questgivers around.

I had a chance to run Magister’s Terrace, but it came a bit too late in the evening to due the trip justice. I’m probably a little better geared as dps now, but with good healing, I should be able to main tank it and enjoy playing it my way: toe to toe.

Did you get a chance to enter the Isle or Magister’s Terrace? How did you like it?