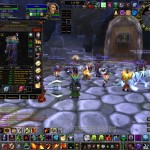 This past Friday I was able to run Karazhan for the first time with my guild. I had been looking forward to this for quite some time now. When I first started on this new realm, it was my sole intention to get a toon to 70 and for the first time raid. That is one of the reasons I went with Gitr and started all over again with my current and only 70 Warlock, Phrixus. Now, I realize I could have found a guild on one of the many other realms that I have high level toons on, but this guild is different. I have fun when I log in and look forward to talking to the people in the guild. That to me means a lot. (unashamed guild plug: Dooms Assailants on US:Silvermoon:PVE) 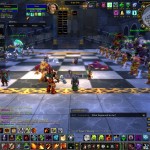 For my first ever Kara run, I have to say I think it went well. There was only one wipe all the way up to Prince, and that one was just bad luck on our part. The Raid consisted of 3 Druids, 3 Warlocks, 1 Pally, 1 Priest, 1 Hunter, and 1 Warrior. I was given the sole job of applying Curse of Weakness or Curse of Tongues, depending on the mob. Well that and causing mad DPS. From what the damage meter said the few times it went up, was that I was 3rd or 4th on DPS all night.

The Opera Event and the Chess Event were my favorite parts. Both were unique and just fun to do. Though I learned a valuable lesson, don’t talk to NPC’s unless you know what will happen. Yeah I kind of started the Opera event without everyone being ready. Yeah I was that guy. No harm though, we got the Wizard of Oz event and just wrecked it. 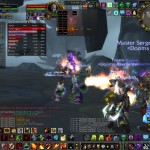 The end of the raid though did not go so well. We wiped 4 times on Prince, and with that we called it a night. I am not really sure what went wrong, but there was hope. We were supposed to try again on Saturday, to no avail though. Only half of the people showed up for the retry, so it was called off. The whole thing took about 4 hours and there were some long breaks in the raid to boot. I was able to get to very nice pieces of gear. The Nethershard Girdle and Boots of Foretelling, I guess it helps that I was the weakest geared player there. No biggie though, there is always next Friday and believe me, now that I have had a taste of the good stuff, (i.e., shiny purples) I plan to try to raid as much as I can.